Randy Rosen is a character that only appears in Paranormal Activity 3. He is the assistant of Dennis in his wedding video business and a family friend.

Randy first appears early in the film, late to help Dennis with their business, the latter decides to play a long practical joke on him for being tardy. Dennis has him hold a bowl on the ceiling, claiming a leak sprung in the roof, Katie and Kristi also join in, faking out a spider in Dennis' hands before he throws it at Randy, causing him to drop the bowl ---- filled with water, on his head.

Randy arrives late to work once again, Dennis then shows him the sex tape of himself and Julie along with the mysterious invisible figure seen during the earthquake.

The day after Dennis sets up cameras around the house, they briefly talk with Julie and discuss Back to the Future, after hearing noises, they investigate the source to the closet in the master bedroom. Julie then bursts out of the closet with a monster mask, scaring them both as a prank.

On September 16th, 1988, Randy talks to Dennis about the urban legend 'Bloody Mary' while unloading boxes into the garage. Katie, who was learning how to skate with Julie nearby, asks to play Bloody Mary before being rebuffed.

Randy illegally checks out several books about the supernatural, they discuss the contents of the books and how the strange goings on started after Kristi started talking to Toby. Randy mentions the previously passed on knowledge that "it" feeds off fear.

The day after Lisa the babysitter leaves, Dennis and Randy review the footage of the ghost in the sheet and Lisa being blown in the face by an invisible force, Randy asks Dennis if he showed the footage to Julie, to which he responds he hasn't as it would mean Julie forcing him to take down the cameras.

On September 23rd, 1988, after Kristi mysteriously falls ill, Randy is called over to babysit Katie while Dennis and Julie take Kristi to the hospital. After asking her what she wants to do, Katie suggests they play Bloody Mary; Randy was hesitant but accepted and decided to film it. He is attacked by an unknown force, resulting in a small gash on his abdomen, objects in Katie and Kristi's room are also thrown around. Following this, Randy packs his stuff and prepares to leave the house, after telling Dennis about the attack he leaves, his last words to watch the tape and tell Julie. He is not seen for the remainder of the film.

Randy after the Dennis's prank.

Dennis and Randy investigating the noises. 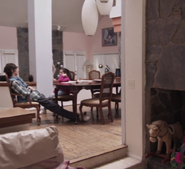 Randy packing up his stuff. 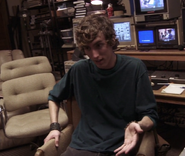 Randy talking about his injury and what happened during the game. 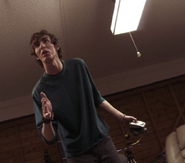 Randy arguing with Dennis about the spirit.

Randy taking his stuff and leaving the house for good.
Add a photo to this gallery

Retrieved from "https://paranormalactivity.fandom.com/wiki/Randy_Rosen?oldid=8042"
Community content is available under CC-BY-SA unless otherwise noted.